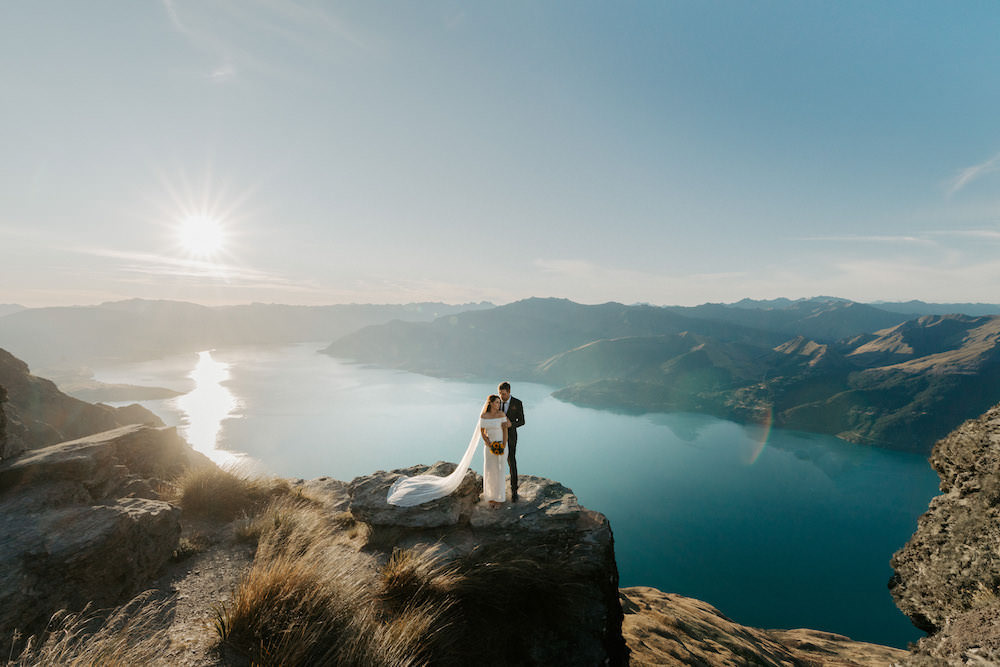 New Zealand elopement package - How to craft an elopement timeline

Elopements in New Zealand are so much more popular now than they ever were. They carry such a beautiful meaning and I fully support running off to near or distance lands to declare your love. Your elopement matters and doesn’t deserve any less than a traditional wedding, you deserve to plan the most epic day and that’s where I come in to help with my New Zealand Elopement Package.

Elopements are a little different. For the most part, elopements are small, only a select number of guests or just the two of you. They are about crafting a day perfect for the two of you, it’s all about rounding up everything that encompasses your love story and celebrating that. The timeline is relatively similar to a wedding timeline in order, however, timewise, an elopement can be completed in four to five hours, allowing for any extra time add on’s and locations. If you are choosing to elope (YEY!) then read on…

First up, there are absolutely NO rules when it comes to eloping, if we can dream up the plan together then we can most certainly do it. Below is my suggested timeline and idea for how the day will run, let’s work together to fin in the blanks and create your unforgettable day. My elopement packages start from 4 hours which I find to be just about perfect, although some couples do choose to add additional hours and make the most of their time in amongst Queenstown’s epic scenery. Don’t feel like you have to miss out on the fun aspects of a bigger wedding day, we can still have cake, dinner, or even a celebratory activity to do together. Elopements can be as adventurous or as chilled out as you like. 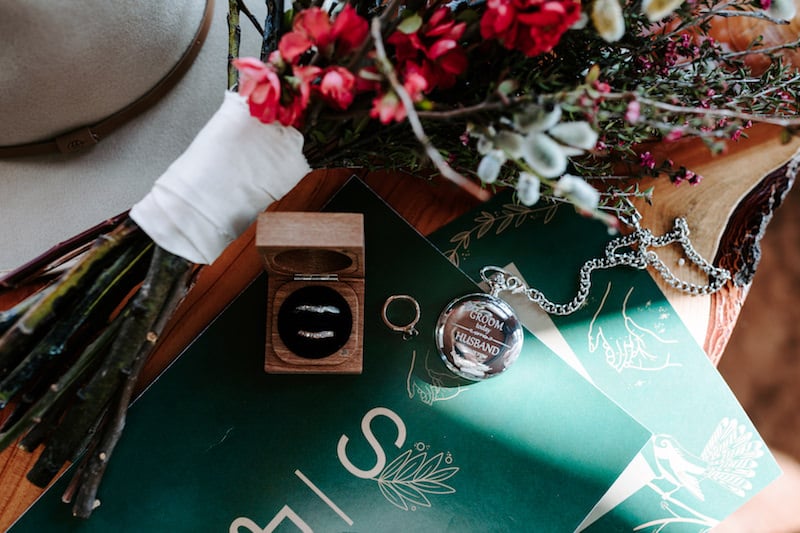 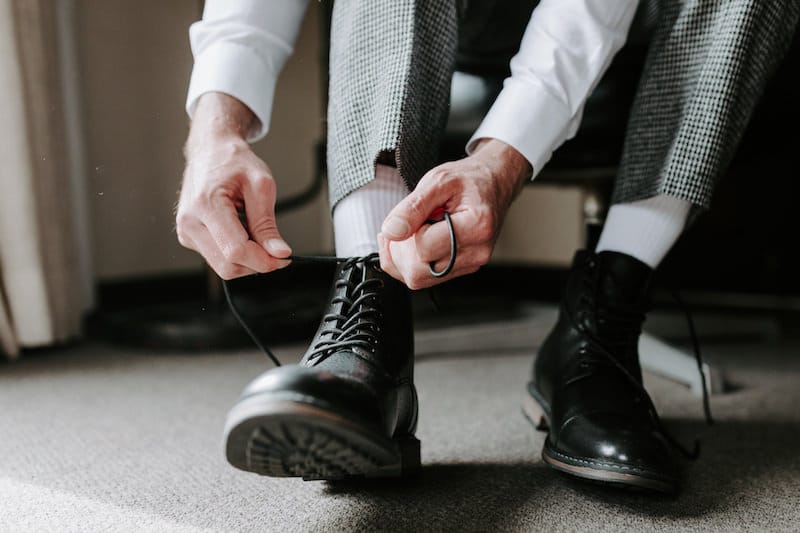 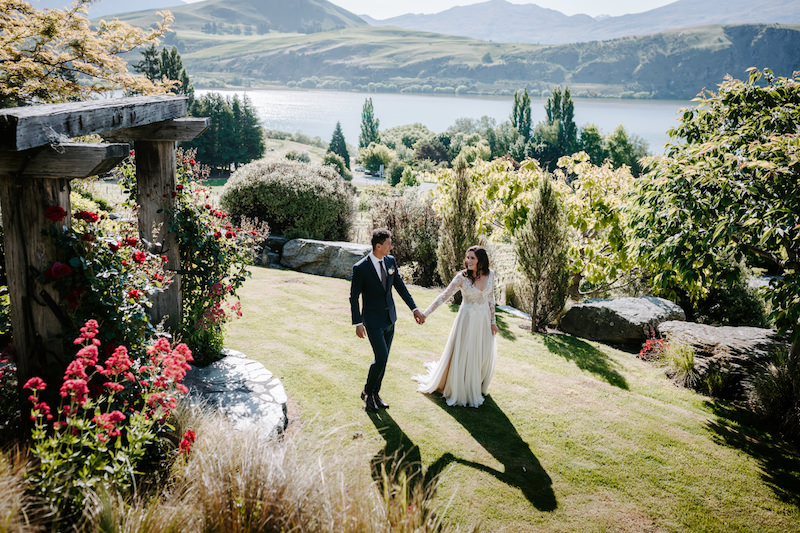 Your day begins together, getting dressed and glammed up ready to say ‘I do”. This can include a pampering session, hair, makeup and a beautiful breakfast at your boutique hotel or just you guys hanging at the airbnb. This part of the day is all about preparation and makes for a fantastic opportunity to get some beautiful candid shots. Think a satin gown, relaxed laughter, hair getting prepped, detailed shots of all the things that make your day unique and special to you.

You may want to consider capturing these moments so loved ones at home can truly come along for the ride when you are ready to be shared.

Or if you are having a few close friends or family members joining or staying with you we can use this time to capture all the beautiful moments spent together.

If you are getting ready together or alone, I would allow forty-five minutes for photos. I want to capture all the beautiful details of your elopement and make sure I grab some beautiful portraits of you both before you say I do, especially if you are staying somewhere really nice.

If you are eloping alone then a first look is a must. You are going to feel so fabulous with your new fancy outfits and glam hair & makeup. Trust me, you will want to capture your partners face when they see you for the first time. It’s such a special moment and it will set the mood for the whole day. We need to schedule in around 15 minutes before we leave for your ceremony location, that way I can capture those first look feels and also some pre-ceremony portraits.

If you don’t like the idea of a first look now would be a good time to take some individual shots or some pics with any family and friends you may have chosen to include. 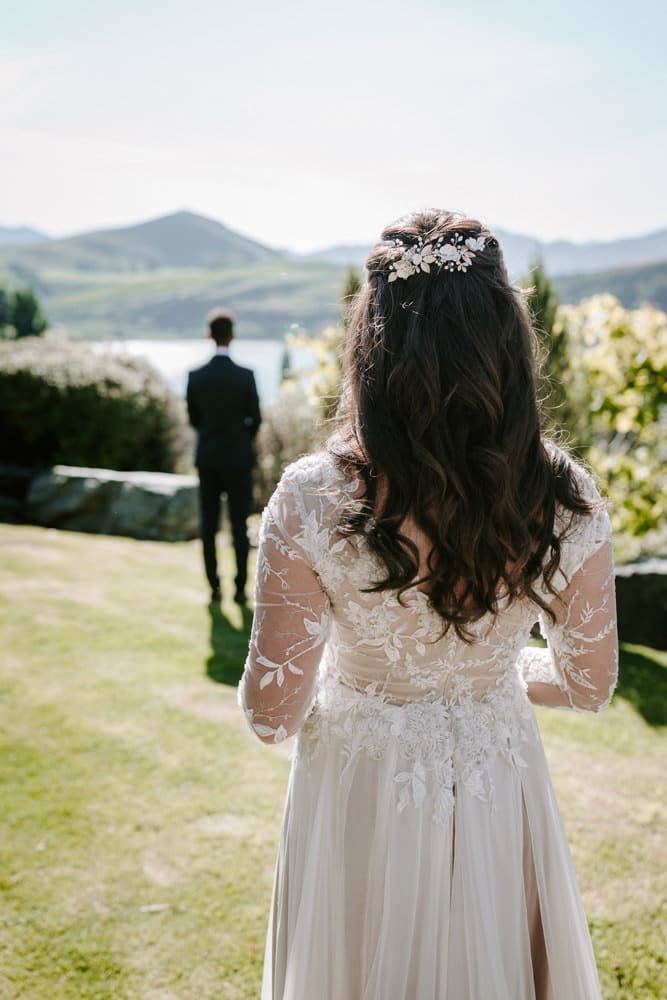 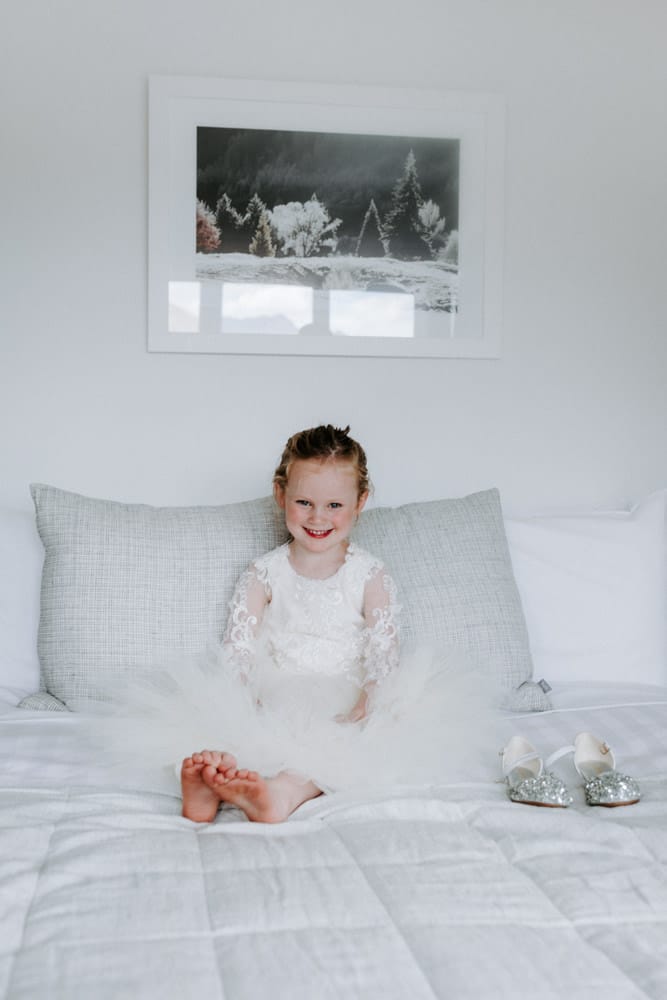 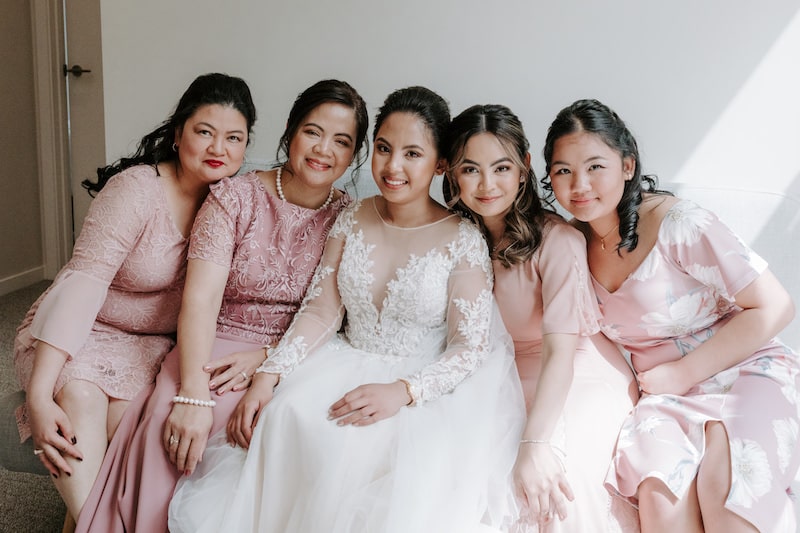 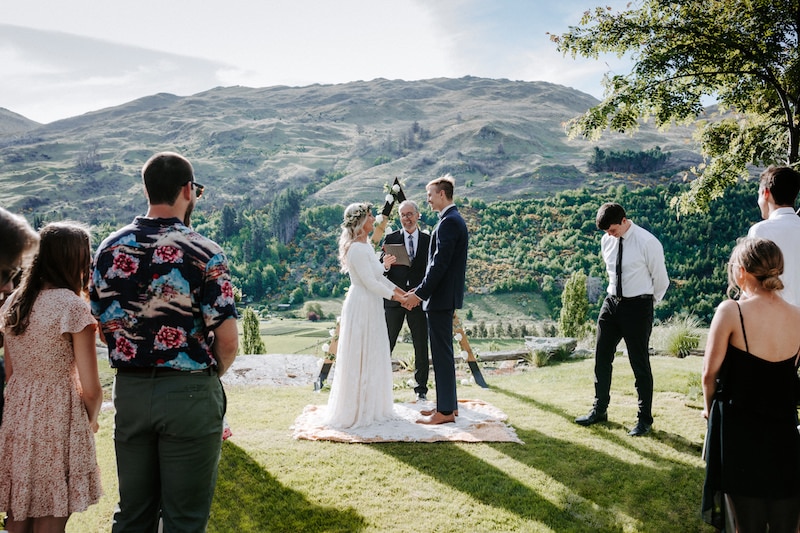 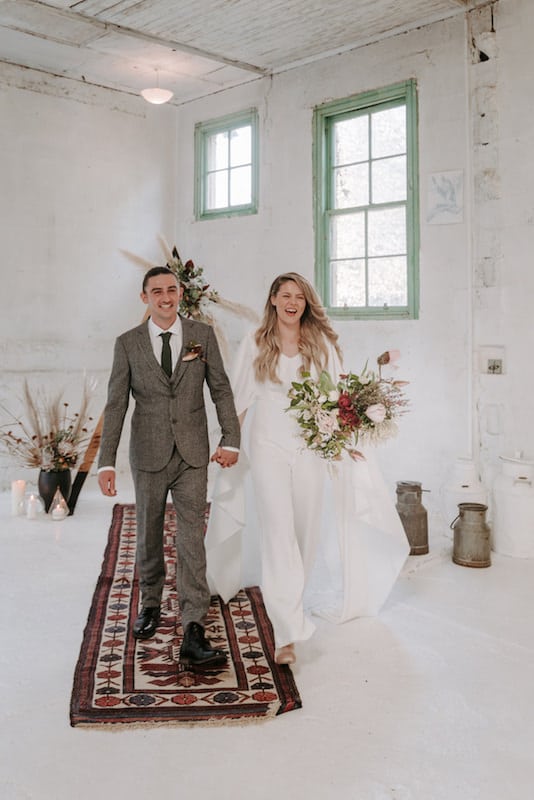 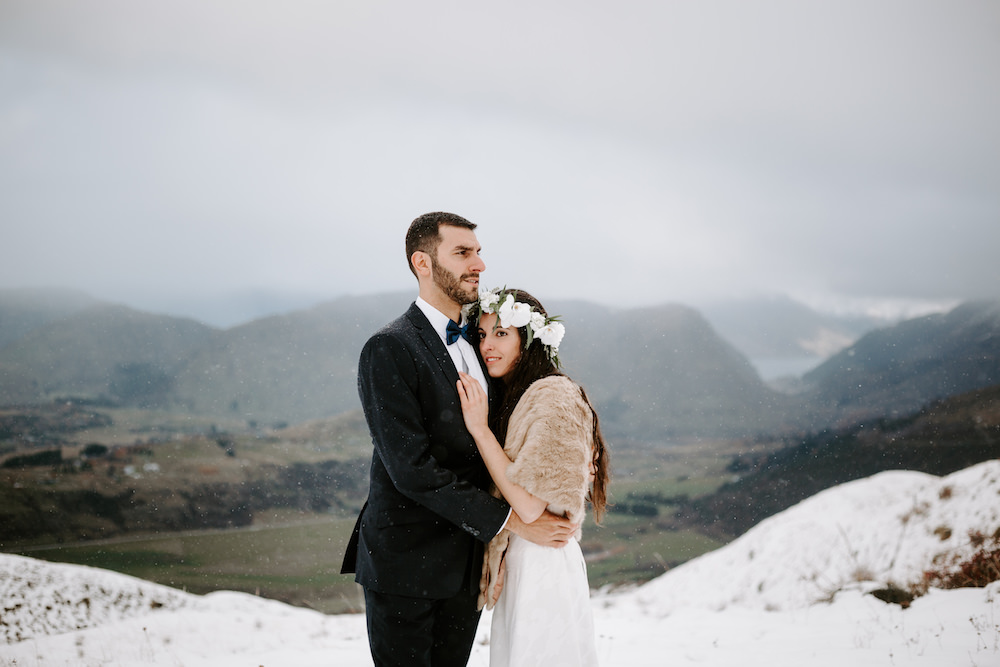 We may have flown, driven, or hiked to your elopement location, either way, when we get there, allow one hour for your ceremony. The setup could take around 10-20 minutes so let’s factor that in too, but this all depends on the music, video, or live streaming. The ceremony itself usually lasts around 20-3o minutes and combines all the key elements you may wish to include, these could be the I Do’s, first kiss, vows, or a special ritual.

If you have family or friends attending, I will also capture all the congratulations, hugs, and kisses or if it’s just you two we can focus on some couples portraits on location.

Tons of couples choose to have unique celebrations following their elopement ceremony. It’s always been a blast to see how each couple chooses to celebrate the closing of their wedding ceremony. Some couples hurl confetti (biodegradable of course) in the air, some toss flower petals or seeds, or the old classic pop the champagne. I have seen some couples take the moment to let loose and scream as loud as they can from the mountain or cannonball into an alpine lake… Like we said before, this is your day. 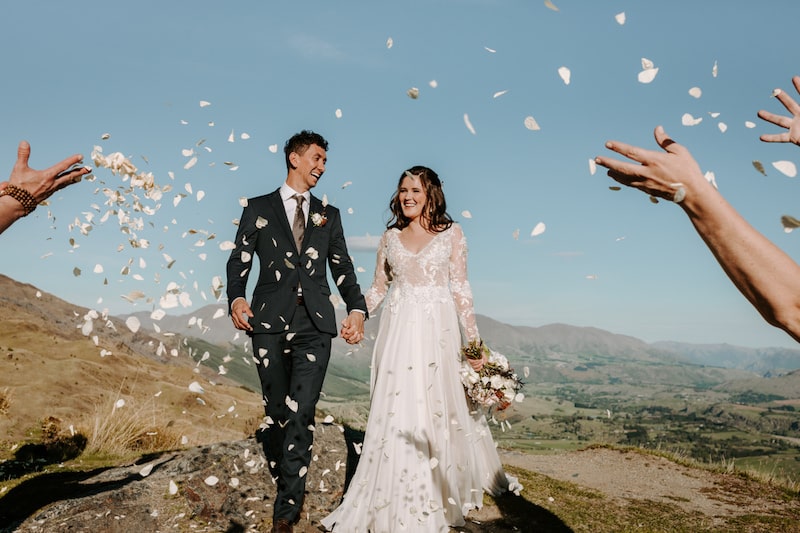 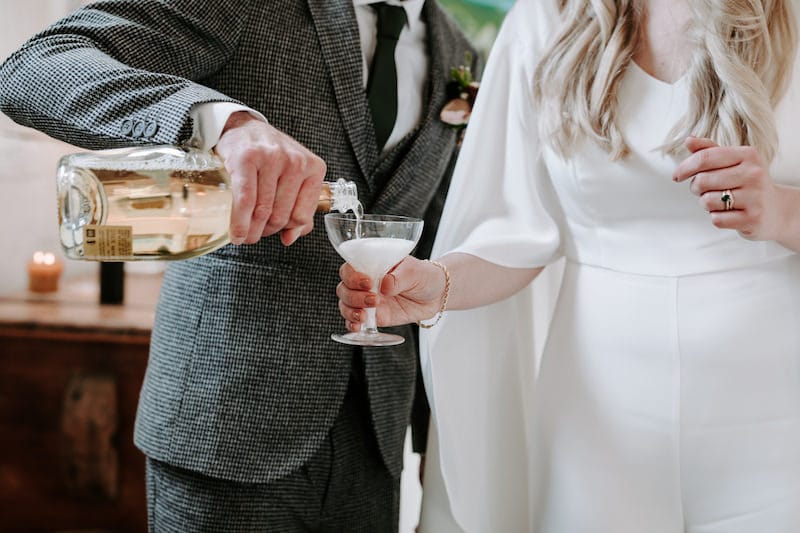 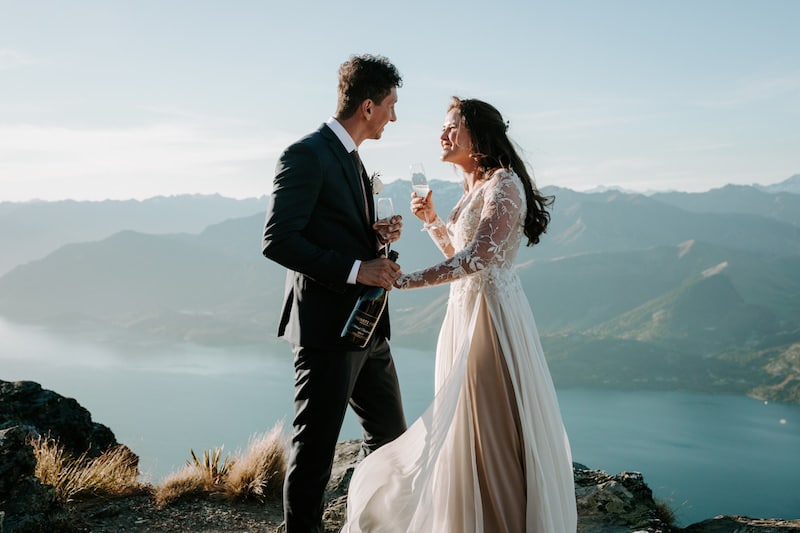 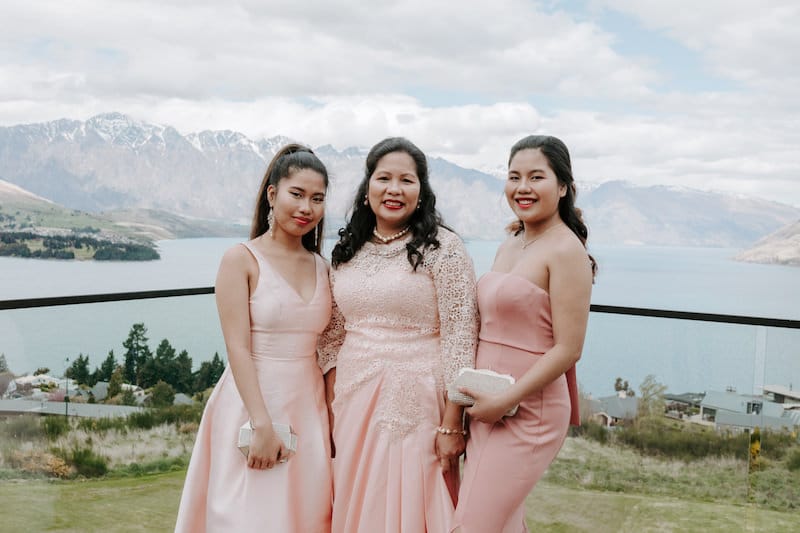 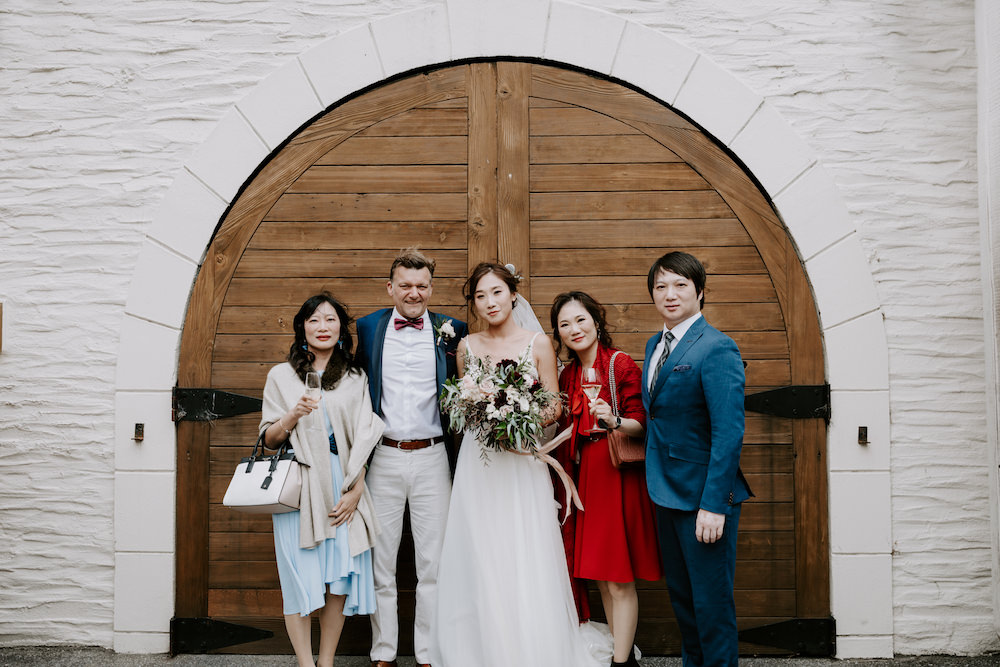 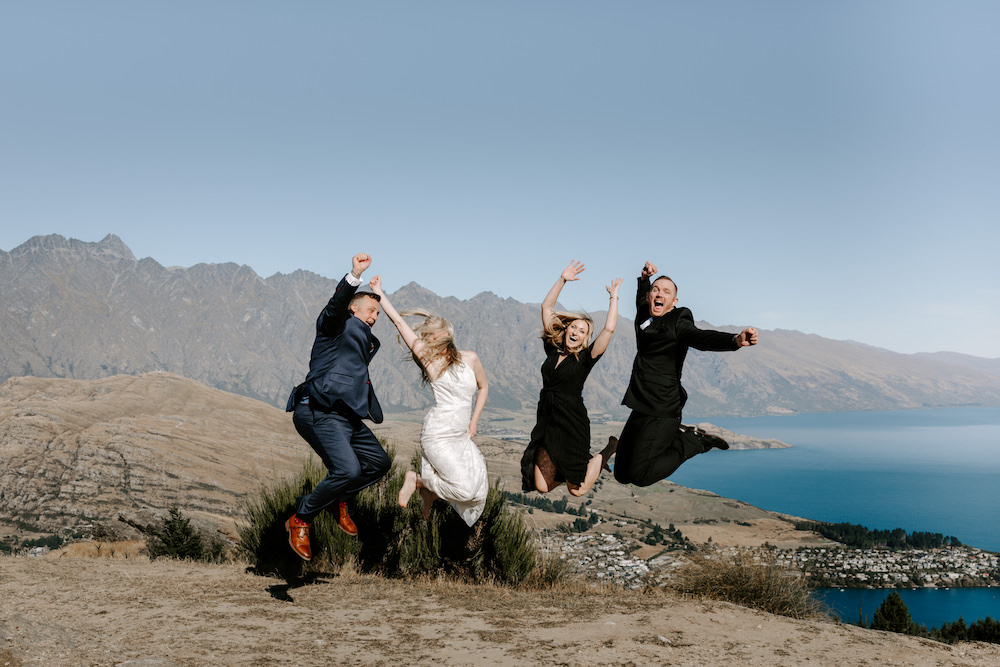 Some elopements include other people, family members, friends, and children who come along for the ride. That is fine, again it’s your day. After your ceremony can be a great time for family portraits. This is a great time for me to blend into the background and capture some candid shots of you and your guests celebrating, as well as the all-important group shots. We can schedule in a 30-minute photo sesh with the fam at a time that fits perfectly in your day.

This is where we take off on a shoot together. It could be as wild as taking a Helicopter flight or, if flying isn’t your thing, we can visit a variety of Queenstown’s ground locations. Even without a helicopter, it’s only a short drive up a local mountain to achieve some awesome views of the amazing area. This is the best time to soak up all those epic mountain views. Now the hard part is over you can sit back, relax, and enjoy the scenery while I guide you and help create some amazing images that you can cherish forever.

I want you to have a one couples’ session at least. Depending on location and light we can always move to a new location and or fly to a different mountain top. Timing for your couples’ photos depends on how many locations you wish to visit so let’s allow one hour per locations including the drive time. Without a doubt, these are going to be your favourite images from the day that will hopefully end up proudly displayed on your walls. There really is nothing else like capturing true love on mountain tops.  It’s your elopement, your way, just the way you want it. 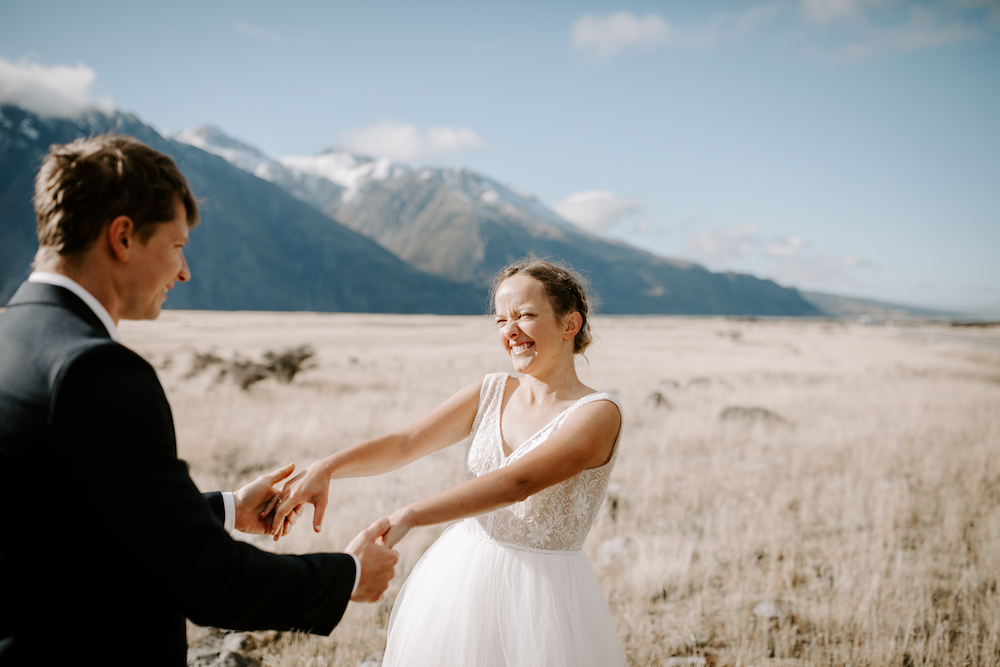 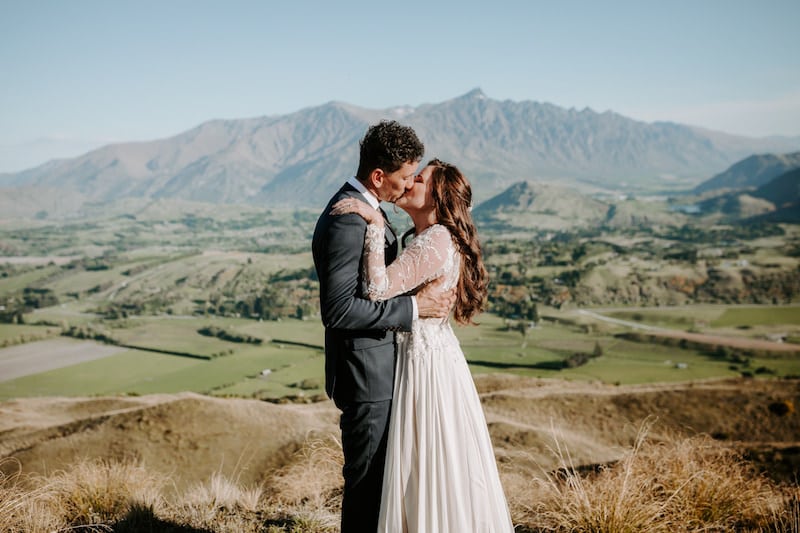 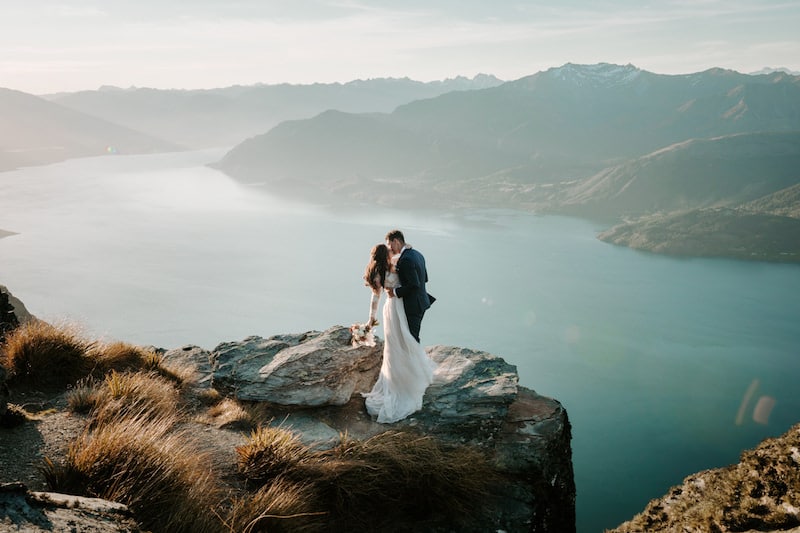 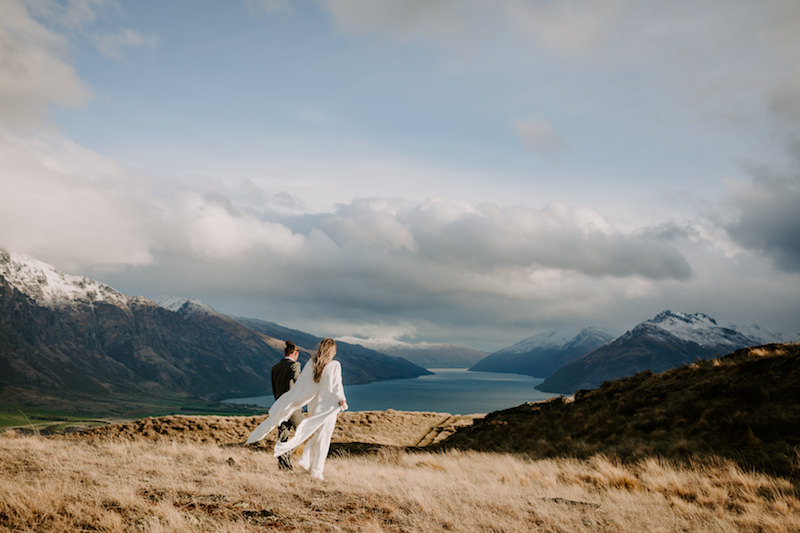 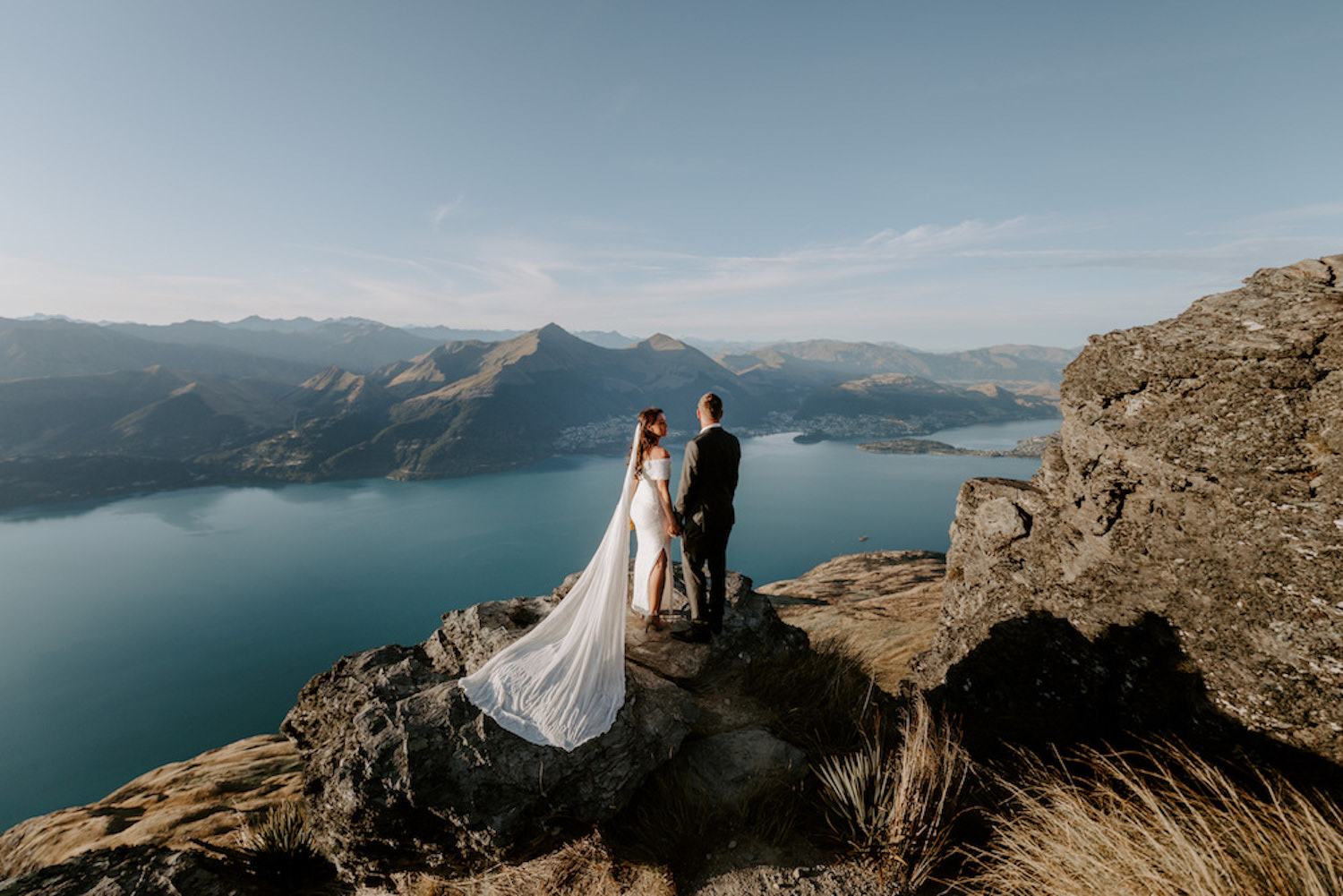 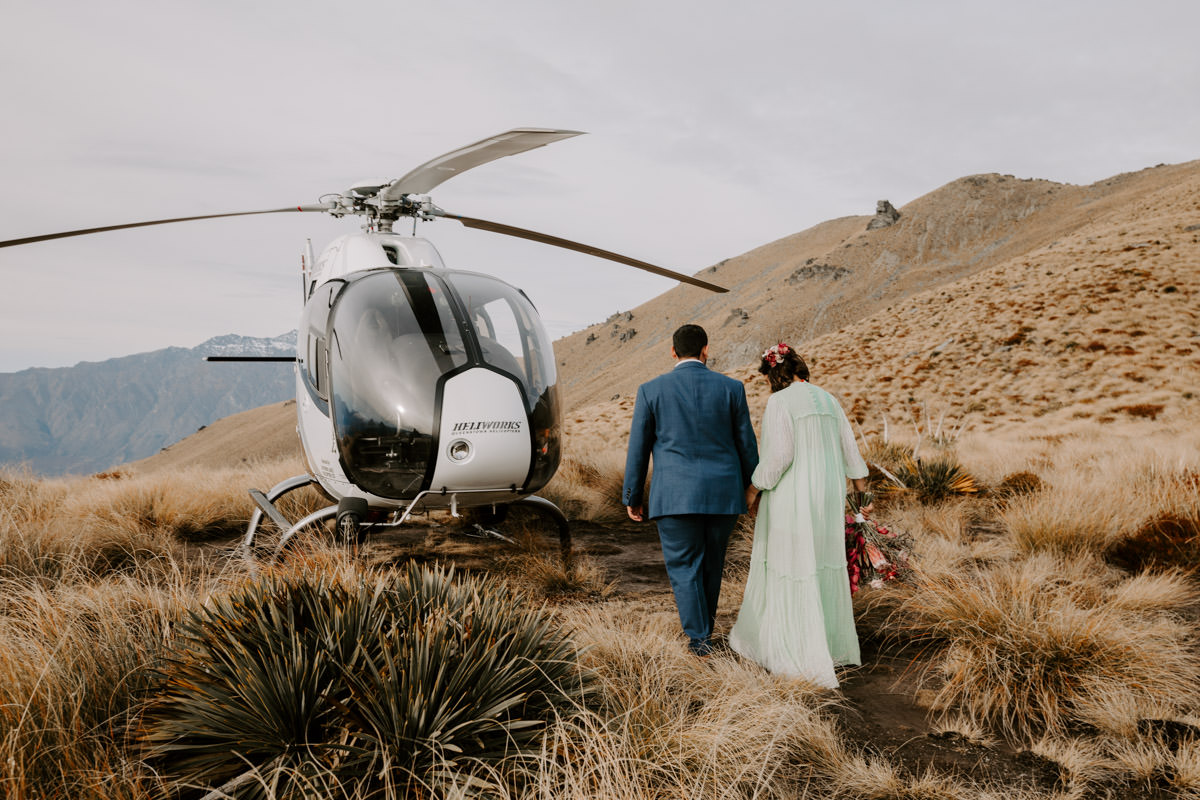 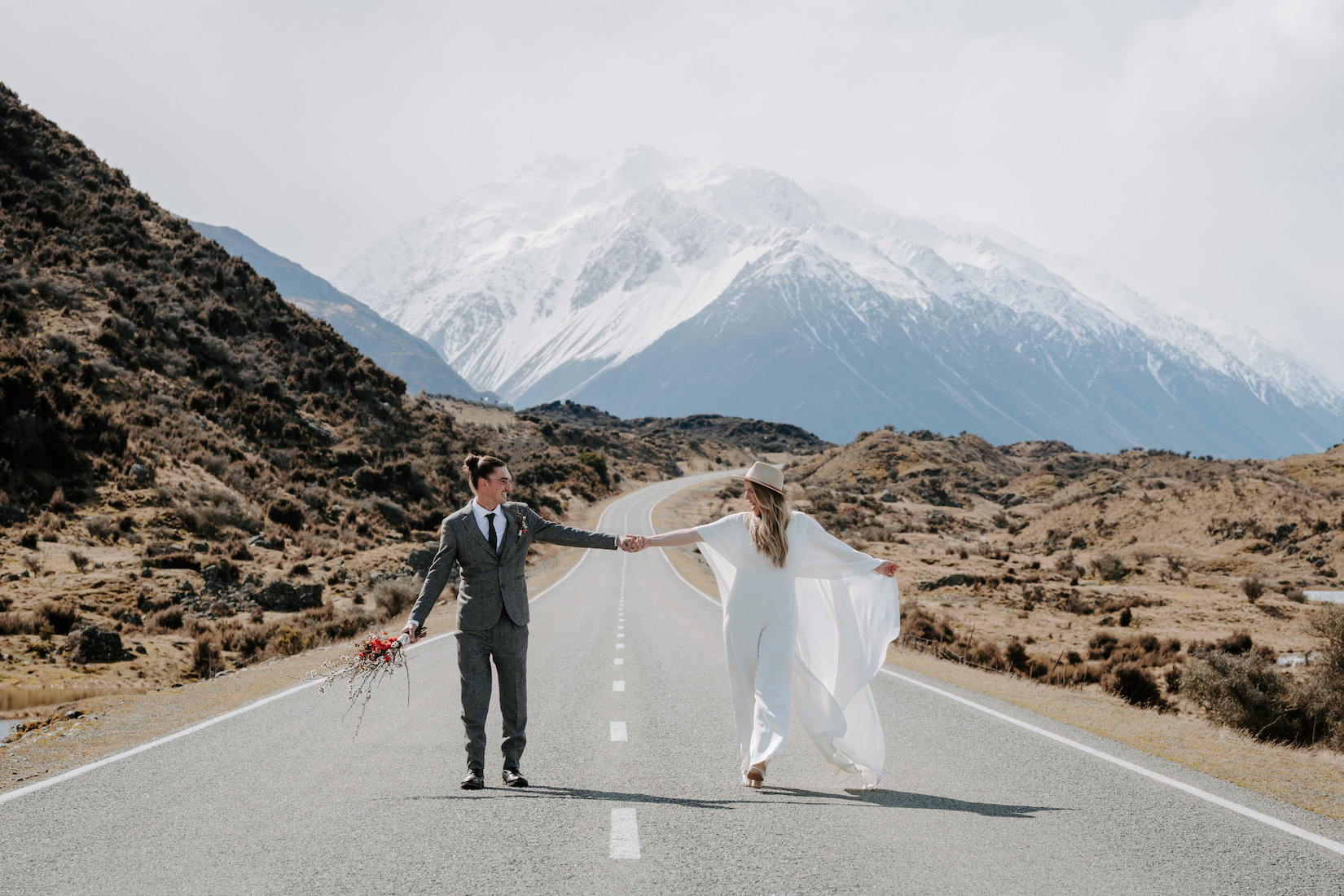 Towards the end of your elopement, we will wind down and part ways. Don’t worry, it won’t be long until you see and hear from me again when I deliver your beautiful memories. Remember this before I leave you here, there are no rules to eloping. Leave all preconceived ideas at home and the logistics and let’s get planning. Do you want to do something epic? Fly, hike, or boat across the lake? Whatever your heart wants for your special day, let’s do that.

1.Let’s avoid the crowds. The best way to do this is plan to elope on a weekday, that way at popular locations we will be alone.

2. Be sure to work in extra travel time. Driving from your cute Airbnb to the ceremony location and to the helipad all take time, so factor this in.

3. Work out the best time for epic lighting. I can help you here of course. Better light means better photos and if good photos are important to you then let’s avoid shooting at mid-day.

4. Build space into your timeline. It’s important to have a plan but let’s leave time around the pivotal moments for spontaneity. This could create space for something extra special.

5. Don’t let anyone tell you what your day should look like. Never let someone convince you to do something you don’t want. Your day should be as perfect as you two, remember that.

Value your day. As big or as small as you want this perfect elopement to be, make sure whenever you think about it you explode with love… after all, we are capturing one of the biggest and best moments of your life.